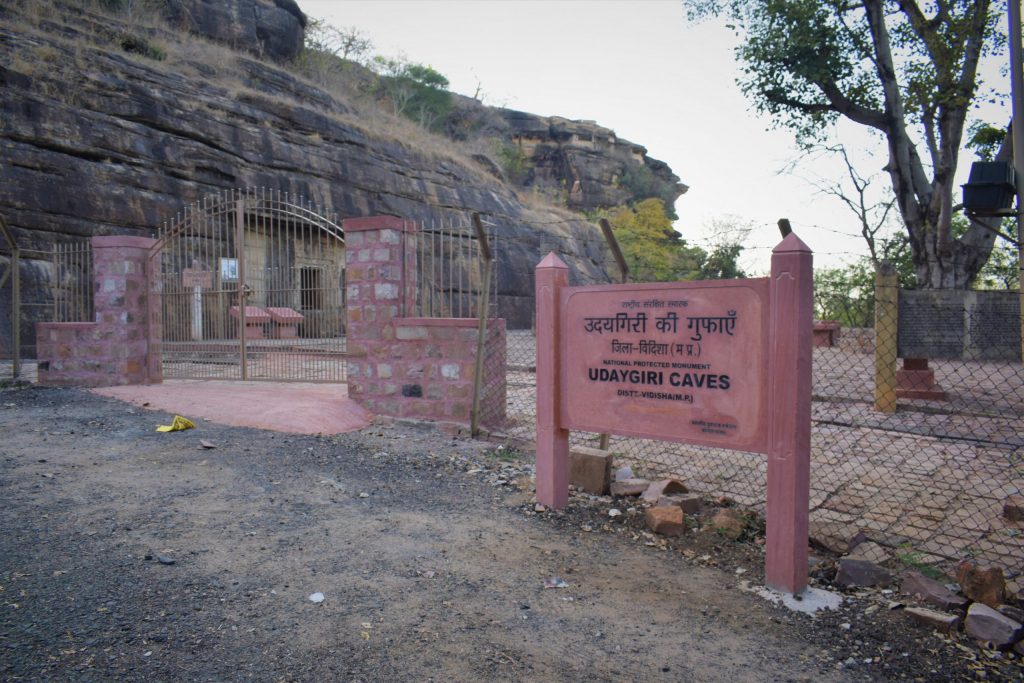 The rich heritage and culture of India came to the fore as we traveled on a delightful journey into the heart of India, the state of Madhya Pradesh. The magic of Madhya Pradesh unveiled itself to our amazement, place after place, and around each bend in the road on our fascinating journey curated and managed by Times Passion Trails in partnership with Madhya Pradesh Tourism. One of the wonders of travel is its serendipitous character and this facet manifested itself in full flow when we stood in front of the Udayagiri Caves. The serene grandeur of Sanchi had transported our minds into a zone of awesome wonder and we were still lost in the exquisite craftsmanship that dated thousands of years ago when we were confronted with the rocky remains of probably the oldest known iconography of Hinduism at the Udayagiri Caves in Madhya Pradesh located about 57 kilometers from Bhopal. 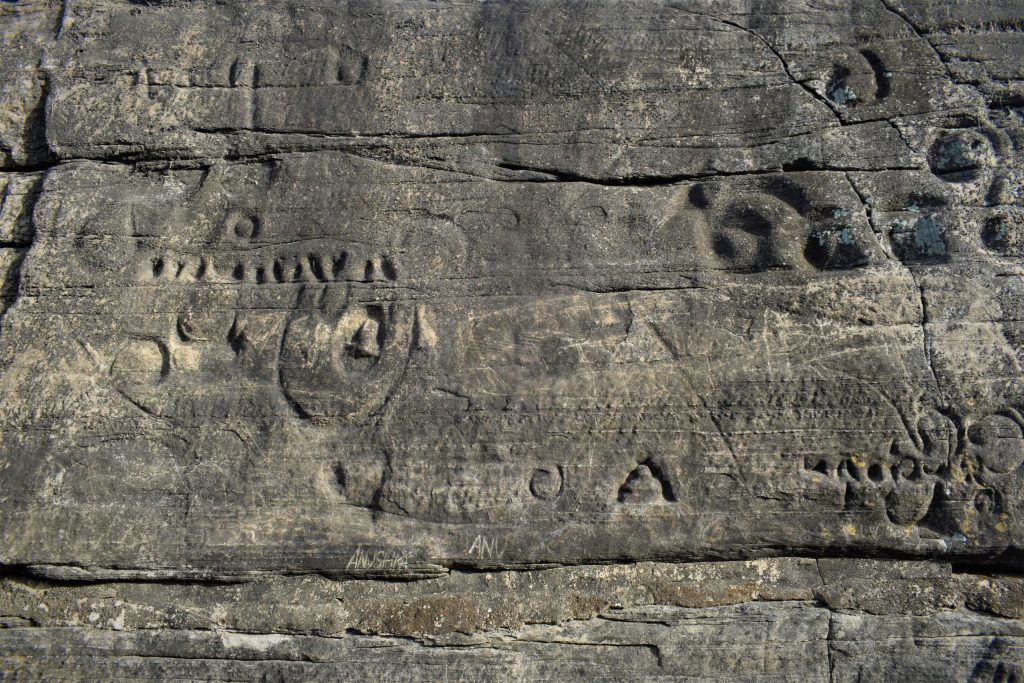 Not far from Sanchi, the UNESCO World Heritage Site stands another site that may look spartan compared to Sanchi but is no less important in terms of the heritage and history of India. The Udayagiri Caves which date back to the 4th and 5th century CE to the Gupta Period are believed to contain the oldest known Hindu iconography in the form of idols, symbols, and inscriptions on rock. 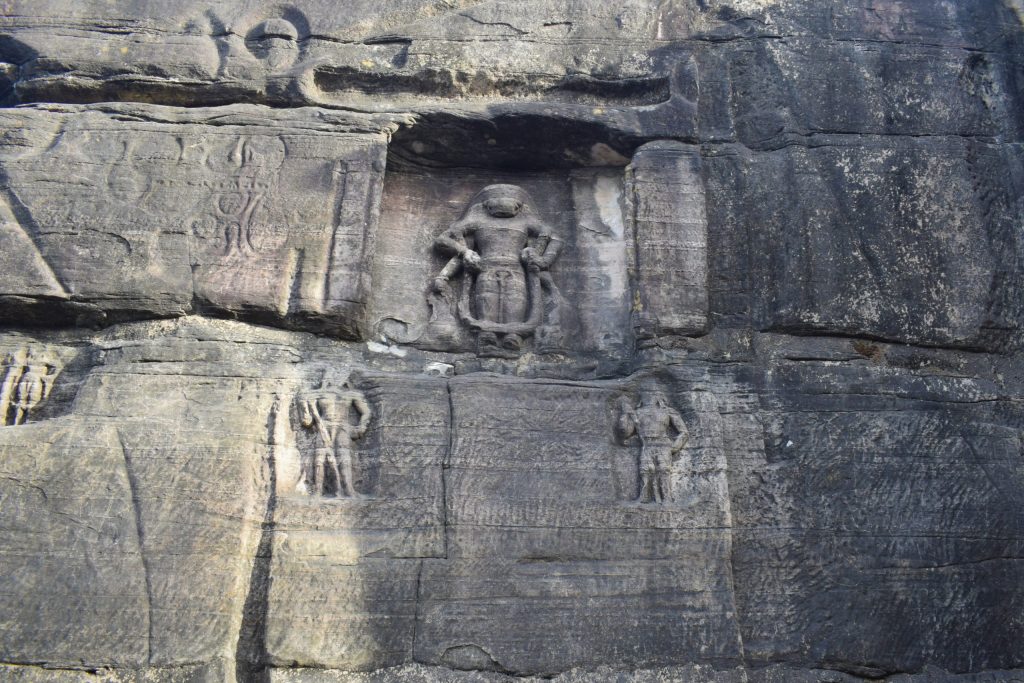 The Udayagiri Caves are believed to have taken shape during the reign of Chandragupta II during a period between the end of the 4th Century and the beginning decades of the 5th Century. The dating has been done based on the various inscriptions in Sanskrit that have been found in the caves. It is also believed that the historic city of Vidhisha which is about 6 kilometers away and the Udayagiri Caves were part of a single human settlement. The site was not only an important Hindu site but also a sacred site of Jainism and Buddhism too as evidenced by the various findings across the site of the Udayagiri Caves. 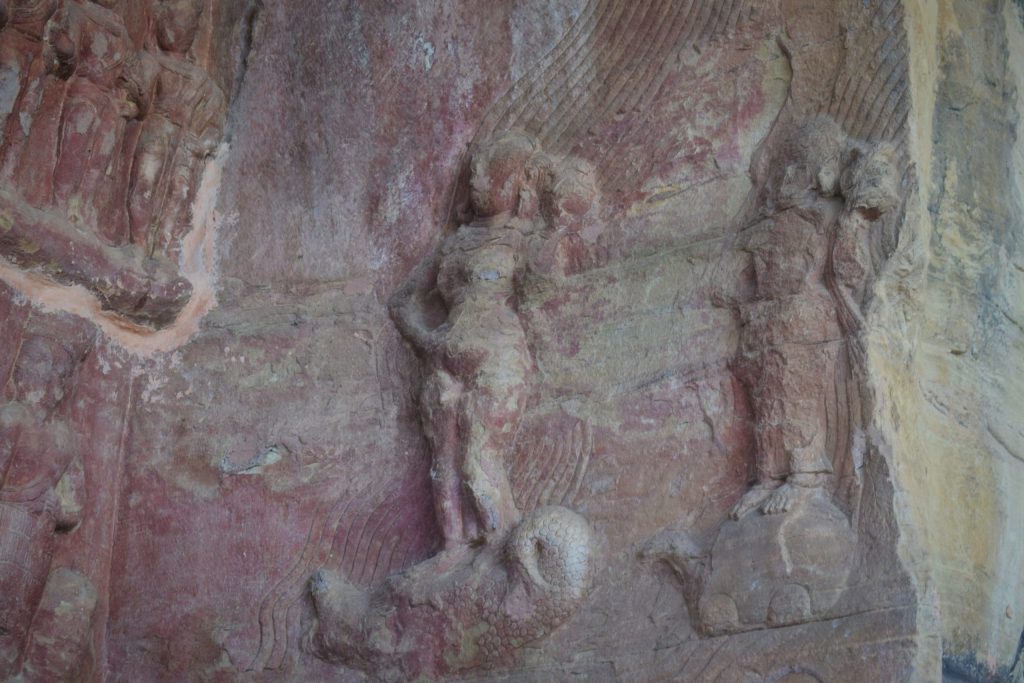 A deviation from the main highway takes you to the Udayagiri Caves. A wide rocky ridge meets your eye as you get down near the entrance to the caves. A short walk along a pathway that skirts the ridge leads you to the caves that stretch towards both sides of the entrance. The main caves, however, are towards the left-hand side.

The Udayagiri Caves are 20 in number out of which barring a couple of caves dedicated to Jainism, the rest are ones that showcase Hindu deities and symbology. It is interesting to note that the caves of Udayagiri are dedicated to the sects of Vaishnavism, Shaivism, as well as Shakti worship, and probably set the tone for future temples dedicated to the deities from these sects that would spring up across India.

The Udayagiri Caves are one of India’s important archaeological sites which throws open a window to the ancient history and religions tenets dating back to the 4th and 5th centuries. Apart from religious iconographic evidence, the site also has valuable inscriptions dating back to the Gupta period, petroglyphs, ruins of water systems, fortification walls, residential mounds, and much more. All these continue to yield rich archaeological evidence that helps in reconstructing the rich heritage of India.

The Important Caves At Udayagiri 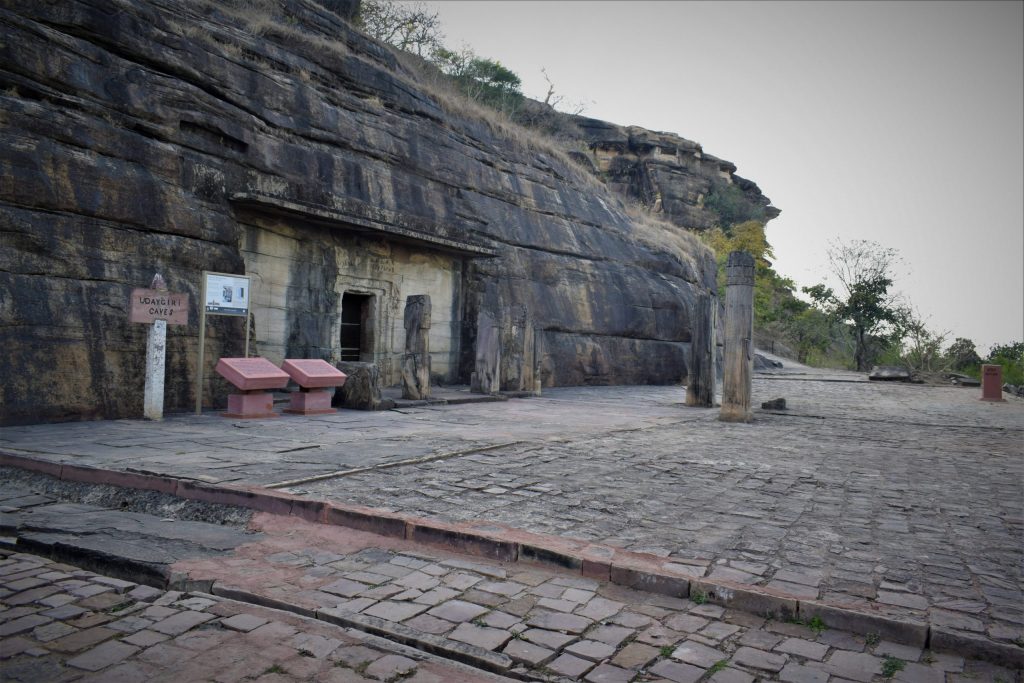 As we walked along the rocky terrain towards the Udayagiri Caves, it was a feeling of walking into the obscure lanes of history, to the times of Vikramaditya Chandragupta II. We were awed by the treat that the rock caves of Udayagiri had in store for us and the artistry and imagination of craftsmen of the bygone era.

Cave – 5 – The Magnificence of Vishnu 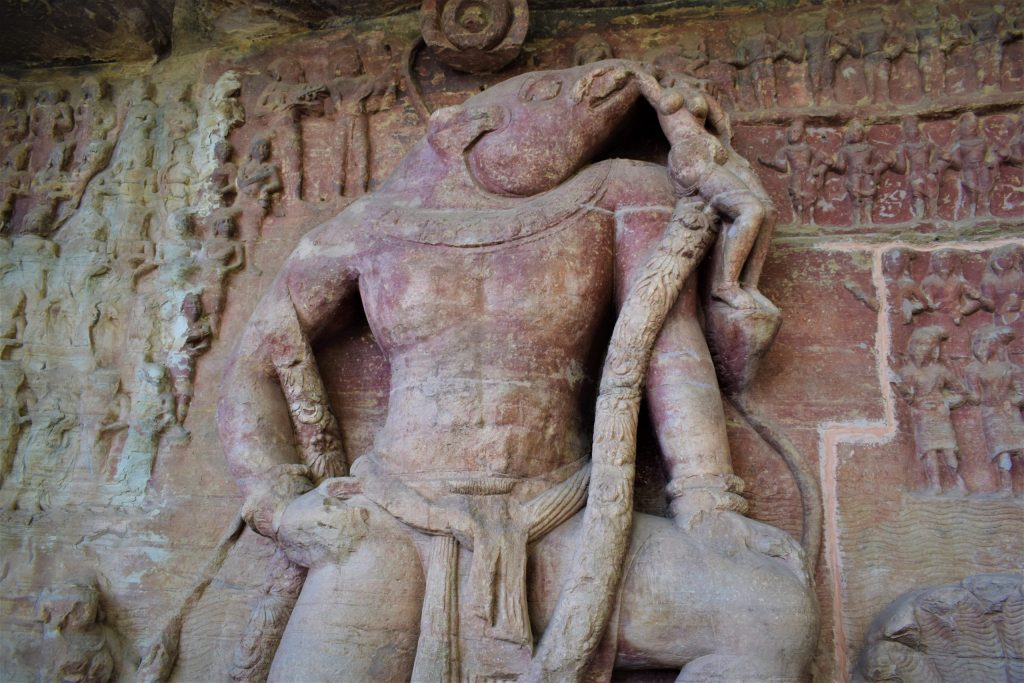 The cave that is numbered as 5 is the iconic face of the Udayagiri Caves and in many ways synonymous with it. The cave which seems more like a shallow niche has the famous panel of Vishnu in the form of the Varaha avatar.

The huge panel depicts the classic scene of Vishnu as Varaha rescuing Bhudevi (Earth) from the depths of the cosmic ocean on his tusk. The incident finds mention in the ancient Vedic texts, Taittariya Samhita and Shatapatha Brahmana. 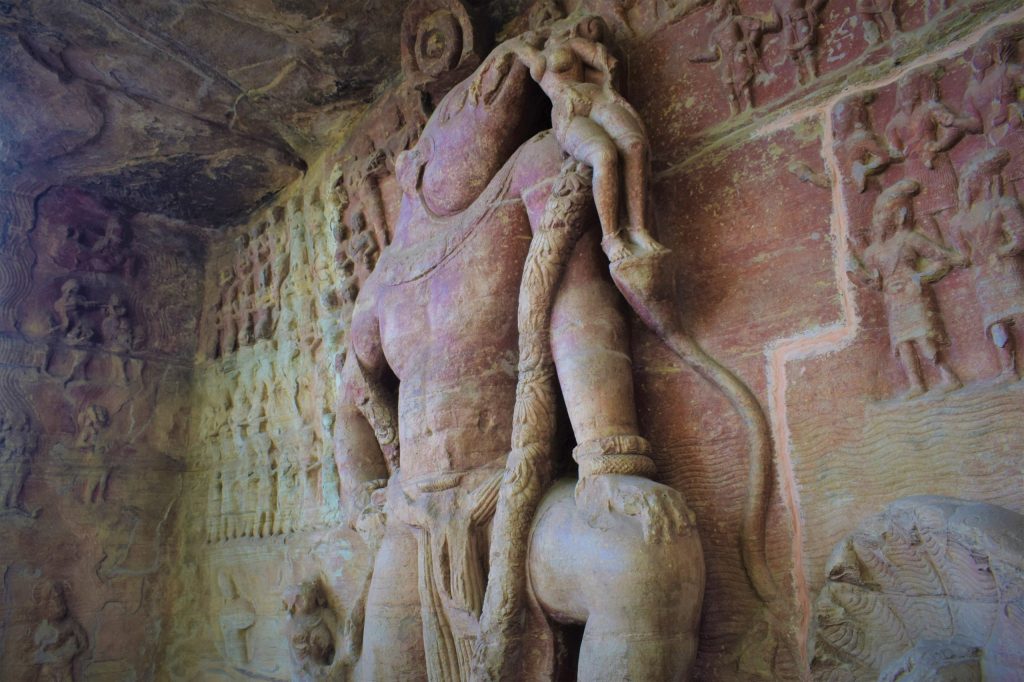 The legend goes that once a demon named Hiranyaksha assaulted Bhudevi and kidnapped her and pushed her into the cosmic ocean. Bhudevi who symbolized the earth was drowning in the cosmic ocean along with all forms of life on the earth. It is then that Vishnu, as the protector of the Universe, assumed his Varaha Avatar, that of a man with the face of a  Boar. Vishnu as Varaha rescued Bhudevi from the cosmic ocean with the help of his tusk.

Cave No. 5 depicts this epic legend on rock. The image of Varaha has you riveted with its sinuous and massive proportions with the vulnerable form of Bhudevi hanging on his tusk. 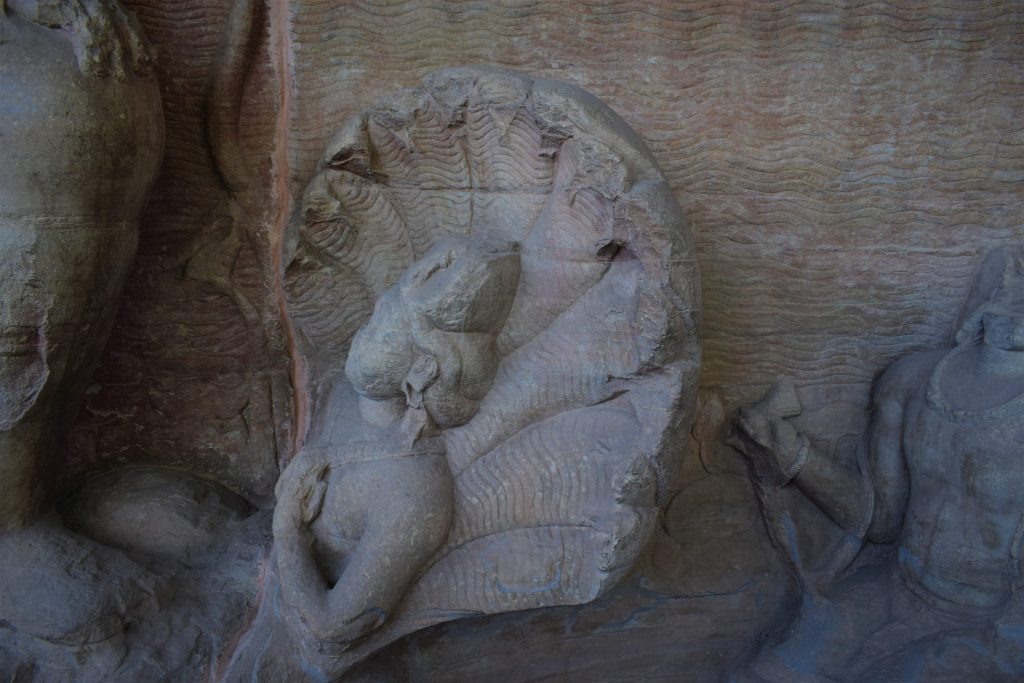 What is really fascinating is that the panel is full of other characters etched to give a massive canvas on rock that brings alive the legend of Varaha. Gods like Brahma, Shiva, Agni, Vayu, and others can be seen. Rishis including Narada and others are also depicted. And in a dramatic display of artistic and poetic imagination Chandragupta II and his minster Virasena can also be seen. In the picture above the image of Nagadeva can be seen at the feet of Vishnu as Varaha. The image that can be seen on the right of Nagadeva is said to be that of Chandragupta II. 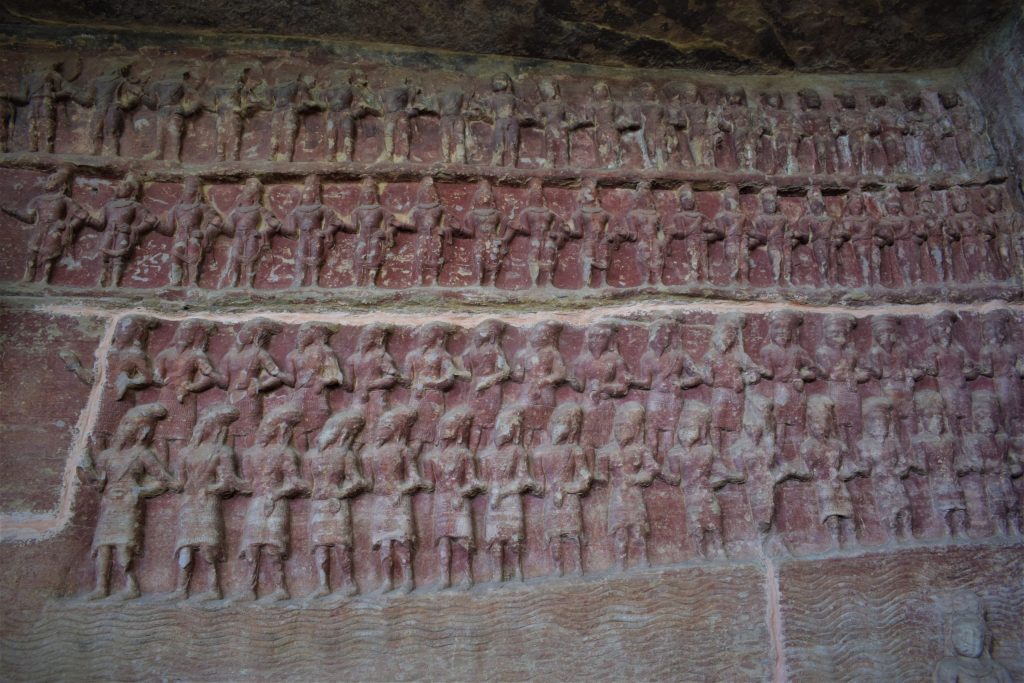 The above image depicts Rishis and Ganadevatas etched in the panel that depicts the epic destruction of the demon Hiranyaksha by Vishnu as Varaha.

Cave-6 – A Synthesis of Sects 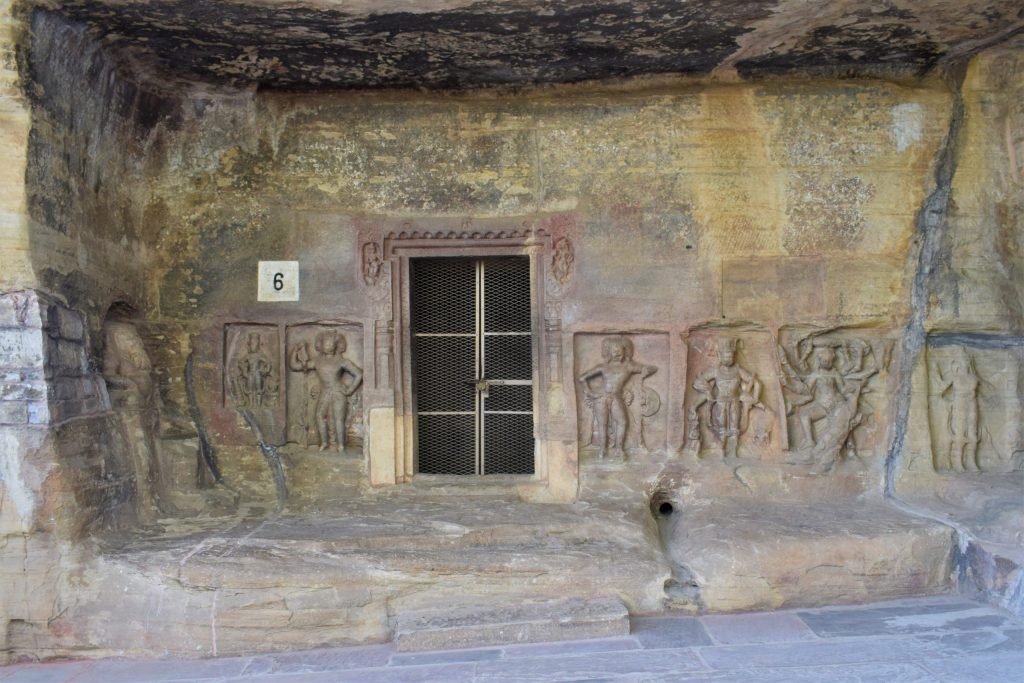 Cave No. 6 presents an interesting synthesis of the sects of Shaivism, Shakti, and Vaishnavism. IT is unique in more ways than one, it has a door that leads to the sanctum. 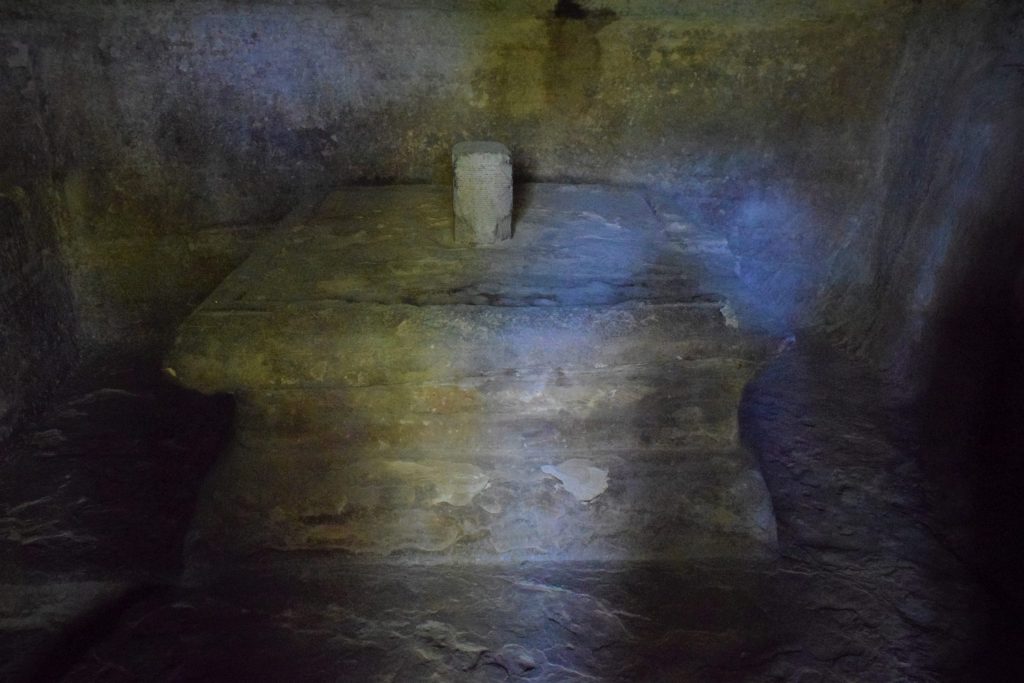 The cave which is known as Sankanika cave based on an inscription is a temple dedicated to Shiva and has an unfinished Shiva Linga. 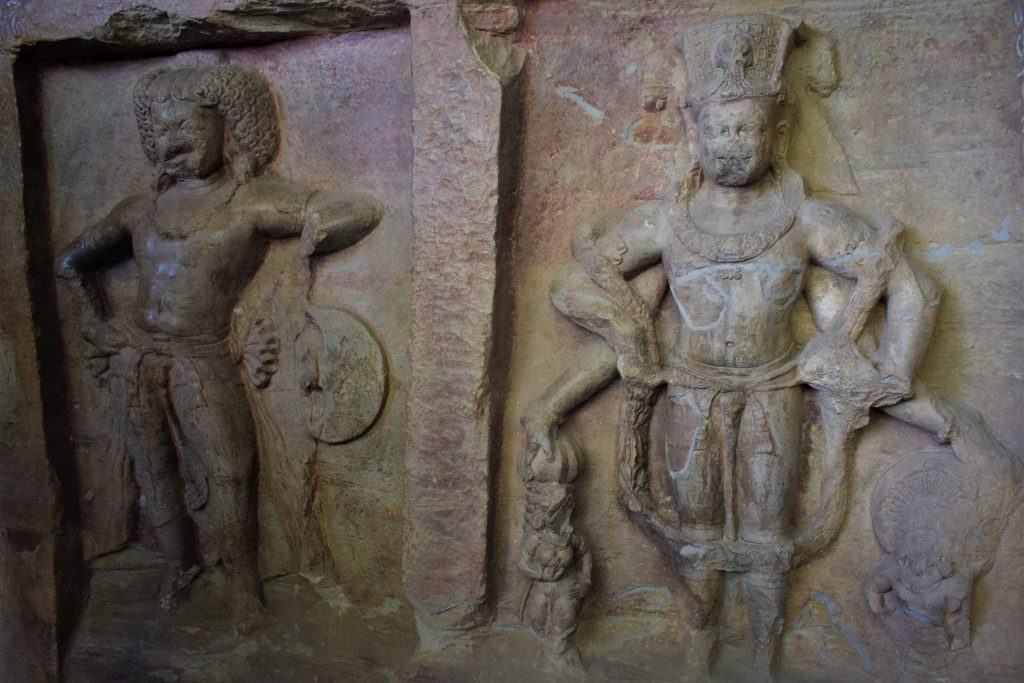 The door is flanked by traditional dwarapalas or doorkeepers. One either side of the door can also be seen the carvings of the images of Vishnu and Shiva on either side. 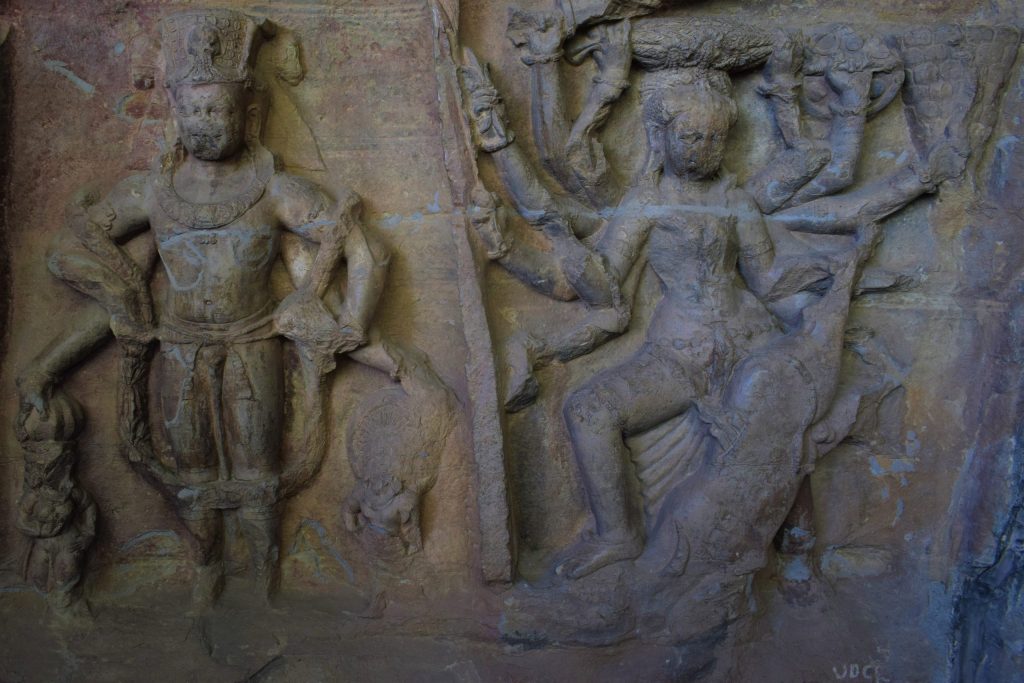 Outside the wall of the sanctum of Cave 6 can be seen the magnificent form of Durga killing the demon Mahishasura. This is probably one of the earliest depictions of Durga in this form in any Hindu temple. 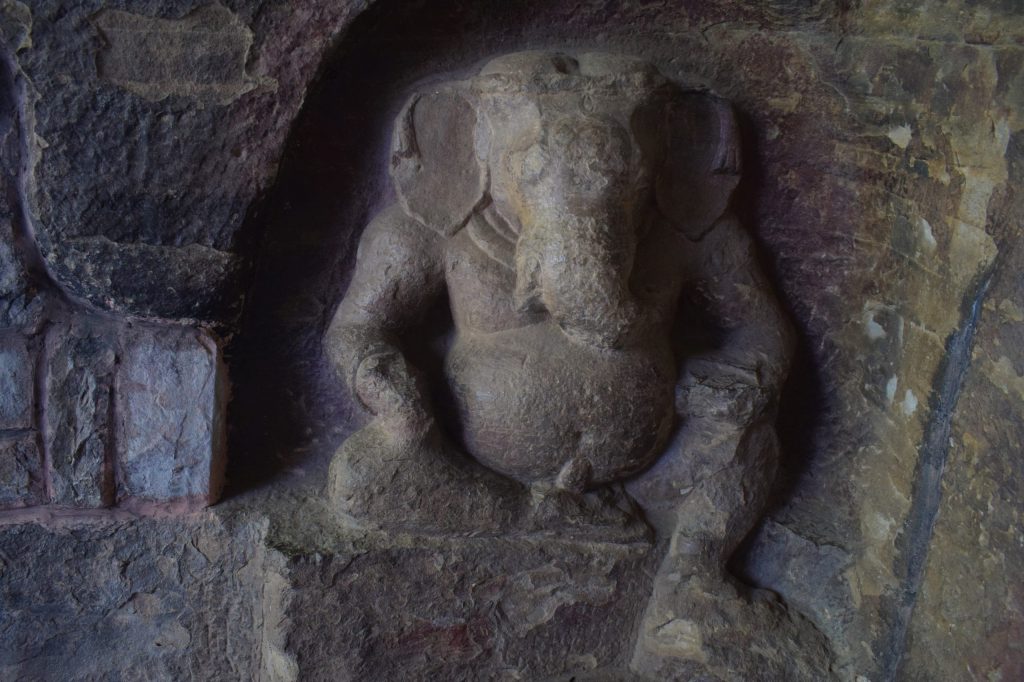 In a small niche by the side of the door in Cave 6, can be seen the beautiful image of Ganesha, again probably one of the earliest depictions of the elephant God. 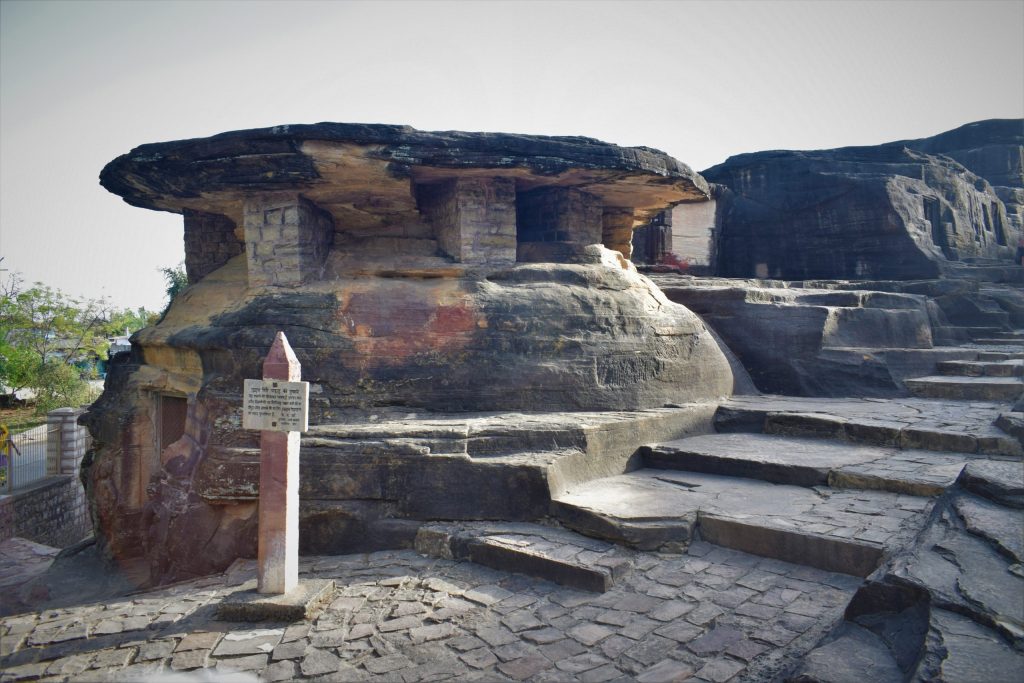 A strange-shaped rock stands atop a cave. This is Cave No. 8 and is known as the Tawa Cave. On closer scrutiny you realize that the flat top of the cave actually looks like a gigantic Tawa or girdle.

Apart from its unique shape, the claim to fame of the Tawa Cave lies in an ancient inscription found on its backwall that talks about the visit of Chandragupta II and his minister Virasena.

“The inner light which resembles the sun, which pervades the heart of the learned, but which is difficult find among men upon the earth, that is the wonder called Chandragupta, Who * * * (damaged), Of him, like a saint among great kings became the minister […], whose name was Virasena, He was a poet, resident of Pataliputra, and knew grammar, law and logic, Having come here with his king, who is desirous of conquering the whole world, he made this cave, through his love Shambhu”, reads the inscription in Sanskrit. 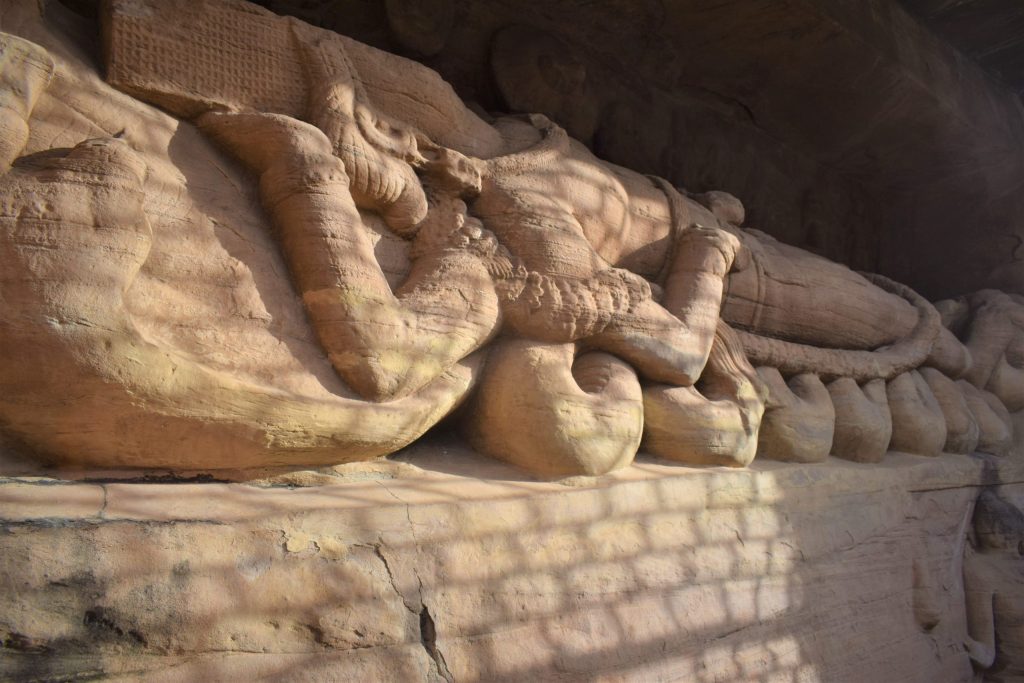 Another impressive Cave is the one that houses the grand image of a sleeping Vishnu. The classic Sheshashayana. This can be found in the Cave No. 13 of the Udayagiri Caves. A massive rock-cut form of Vishnu can be seen lying down with his head resting on the palm of one of his hands. He is lying on the coiled form of a serpent. It is interesting to see the figures of two men near Vishnu’s feet. One of them is kneeling and is believed to depict Chandragupta II while the other figure in a standing posture is believed to depict his minister Virasena.

Have you visited Udayagiri Caves? If not then you must to get an idea of the beginning of the rich legacy of the heritage of India. 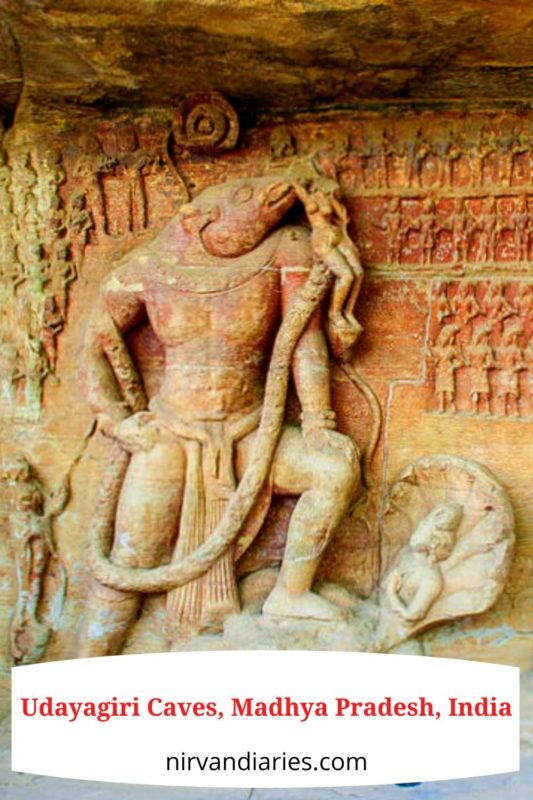 15 thoughts on “Udayagiri Caves – Hill At The Feet of Vishnu”