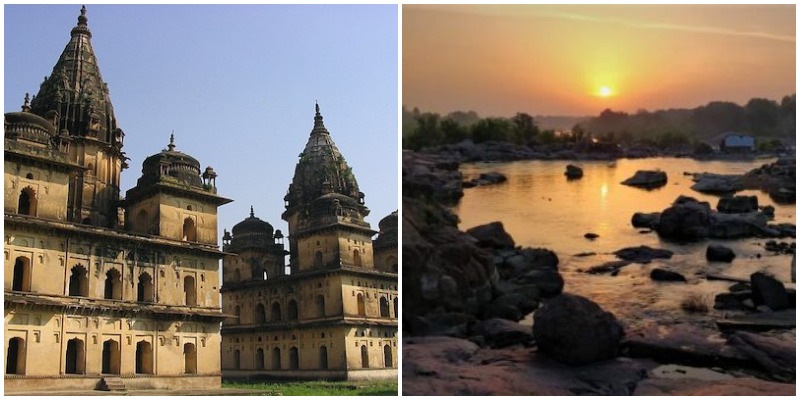 Have you woken up and felt magic all around? Some mornings are really magical and fill your being with bliss that is indescribable, something that can only be felt. A feeling that transcends the physical barriers of time and place. If only all mornings are like that. Such a morning was the one that we woke up to at Orchha, a picturesque town overflowing with old-world charm located in the state of Madhya Pradesh, India. We found ourselves waking up to the divine sunrise of Orchha, as part of our exploration of the heart of India with Times Passion Trails and Madhya Pradesh Tourism. The morning promised something special, something beyond the mundane, as we looked forward to cycling through Orchha and experiencing some of its enchanting vibes.

Cycling Through Orchha – Nature and Heritage 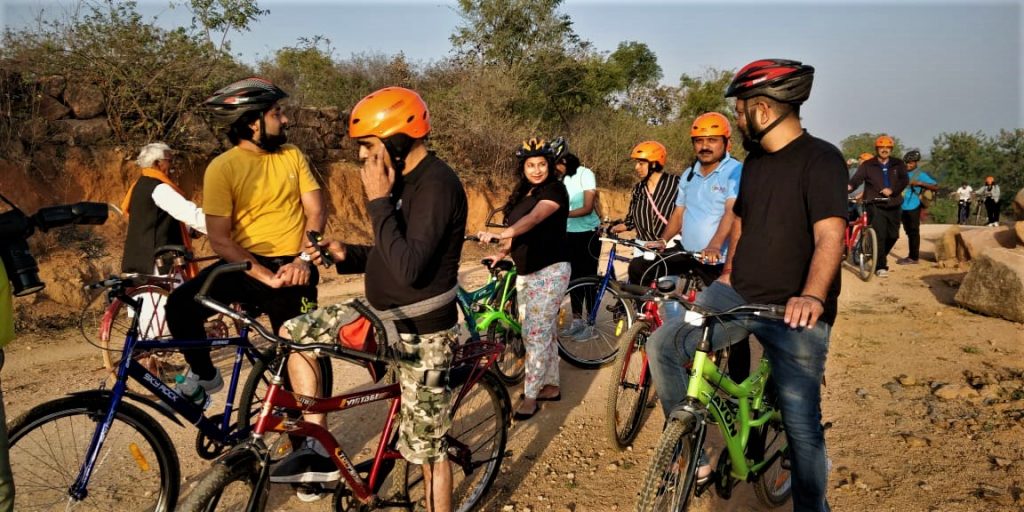 It was still dark when we left the environs of Amar Mahal, a hotel that is modeled on the lines of a royal palace, and the place where we were staying in Orchha. We had to walk a little distance to reach the rendezvous point from where we would be cycling through Orchha. However, fate ensured that we enjoyed a good morning walk before we set off cycling through Orchha as we took a wrong turn and ended up walking a few kilometers. 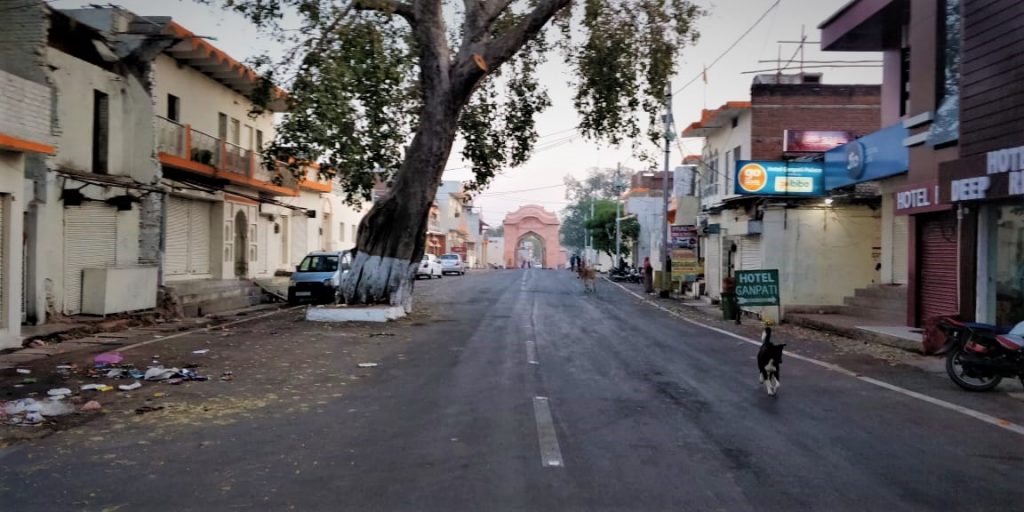 The road stretched into the distance and at that early hour was empty, barring a few street dogs who came running for a pat and a cuddle waving their tails crazily. A few women with flowers in their hand hurried towards the famous Raja Ram temple of Orchha. 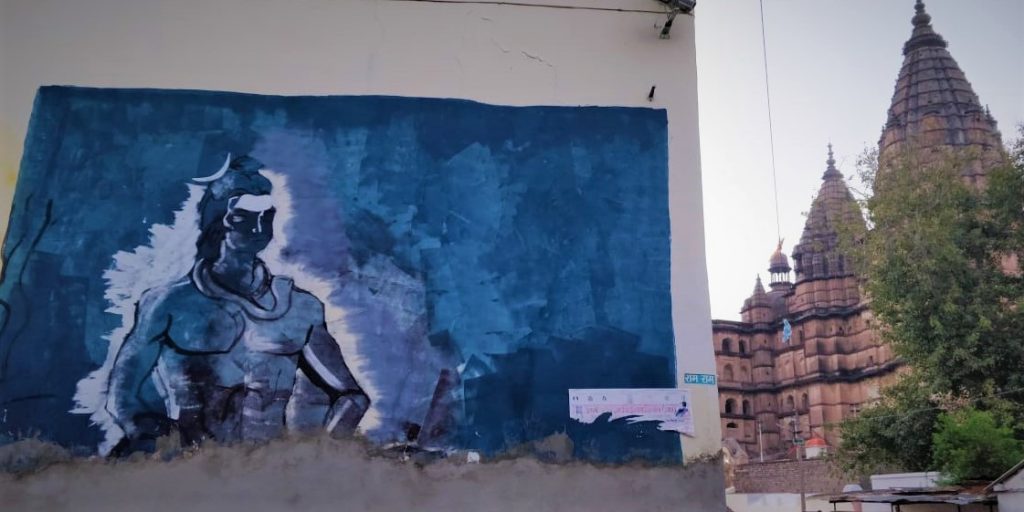 A brilliantly painted Shiva looked down from one side of a wall and from the other side peeped one of the ubiquitous and intriguing Chhatris of Orchha. Orchha looked beautiful in the early light of the morning. 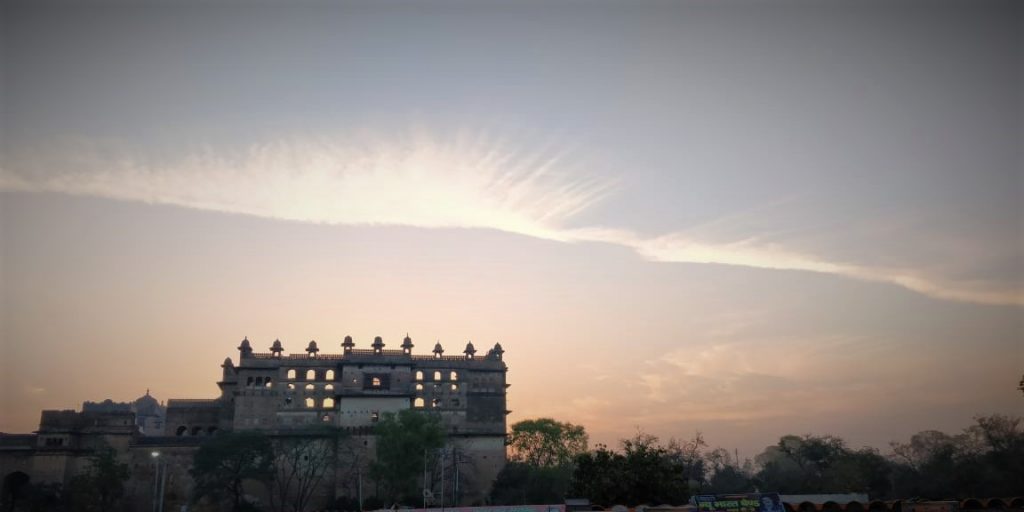 The air seemed to be laden with ambrosia as we spotted the first golden rays of the sun erupting in glory from behind the Orchha Fort while a white streak of clouds created a mesmerizing pattern above it. The beautiful sight lifted our already buoyant spirits further and we ventured further along to reach the flowing Betwa river. 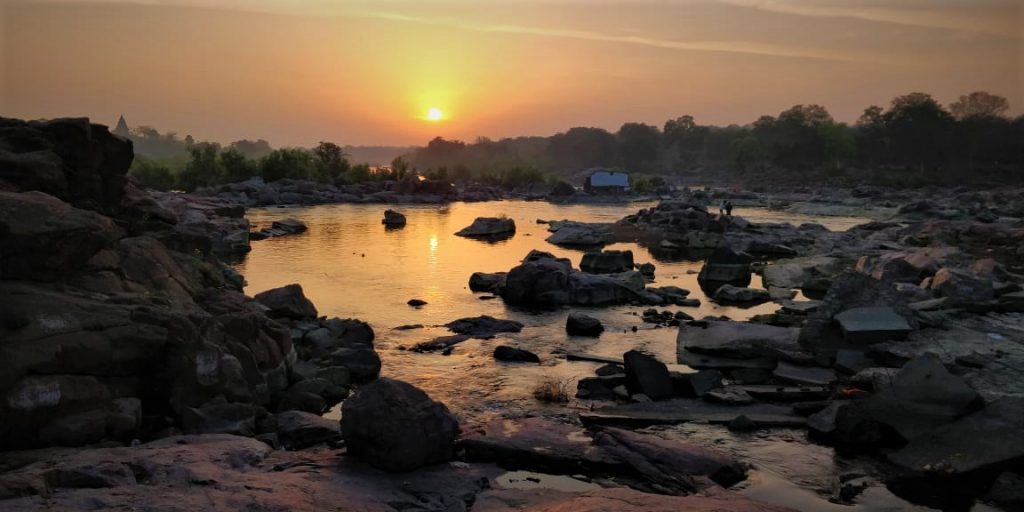 The sight in front of us simply took our breath away. It was as if we were standing before a giant painting of a landscape. The rock-kissed waters of the Betwa river glistened in the morning light, reflecting the golden light showered by the rising sun. It was one of those moments when you feel awed and are overcome by an uncontrollable urge to reach out to the Maker in prayer.

Off We Go Cycling Through Orchha 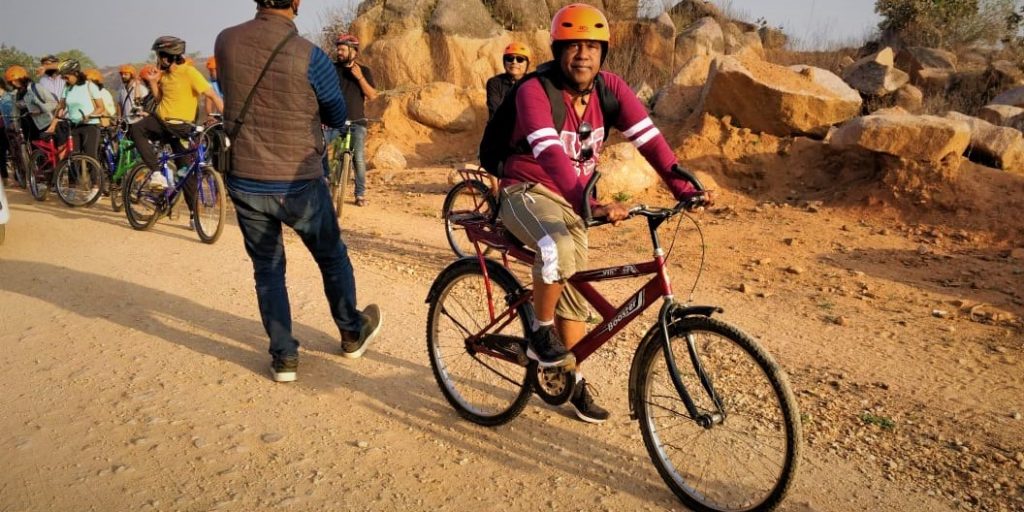 Energized physically and mentally by the lovely morning walk we reached the meeting point to collect our cycles and start our trip, which would take us cycling through the lovely town of Orchha and beyond. We cycled through the town which was just waking up to the day. 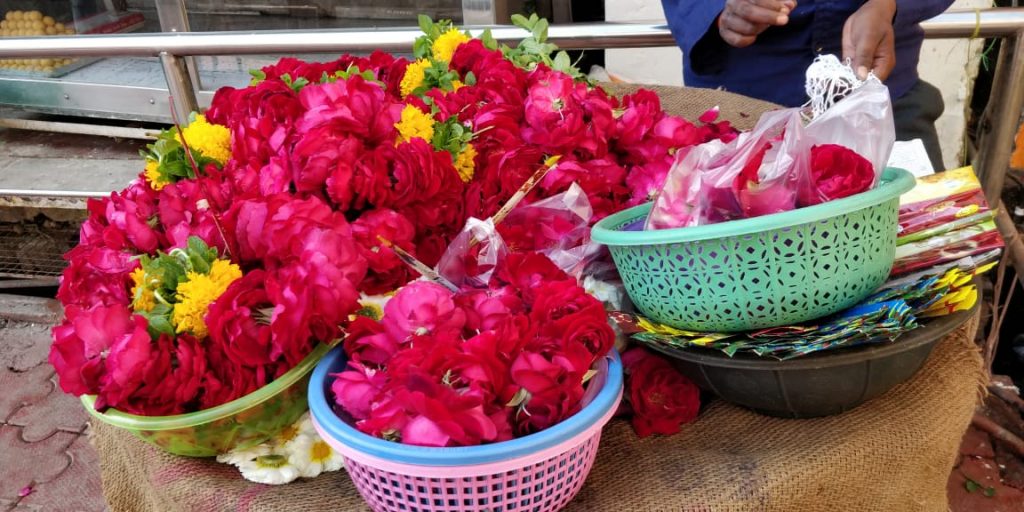 Smoke carrying the intoxicating aroma of freshly ground ginger being boiled with tea leaves wafted from a small restaurant. Flower sellers arranged their colourful and fragrant wares to be sold to devotees going to the Raja Ram temple. 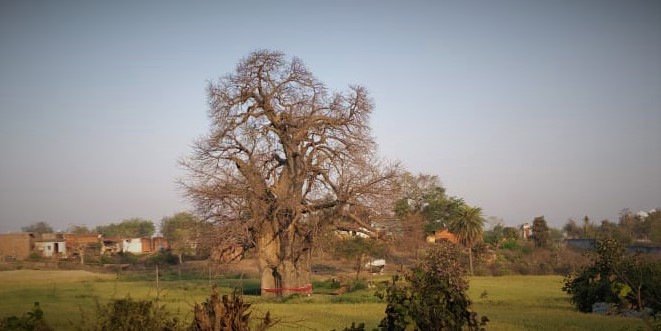 We hit the pedals in right earnest and soon left the town of Orchha behind. We stopped after some time to admire the wild beauty of an unusual looking tree. The tree is known as Baobabs and is believed to be the mythical Kalapavriksh. 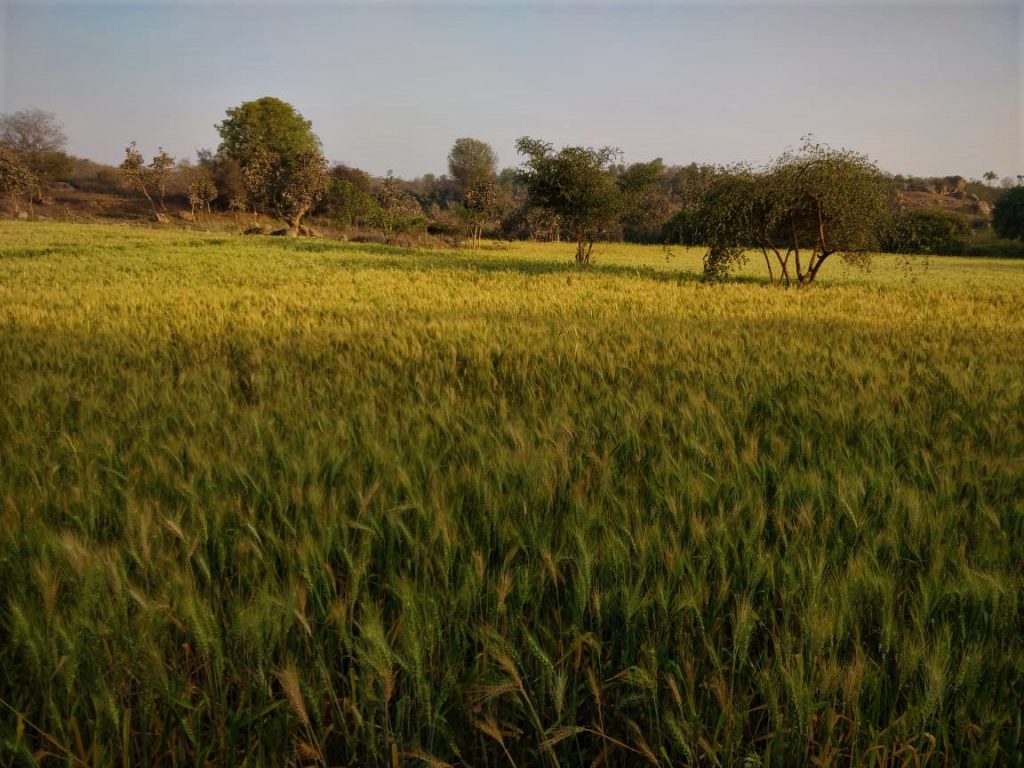 We continued along the road for some time before veering off the road on to a dirt track that passed through emerald fields bathed in the golden light of the sun. 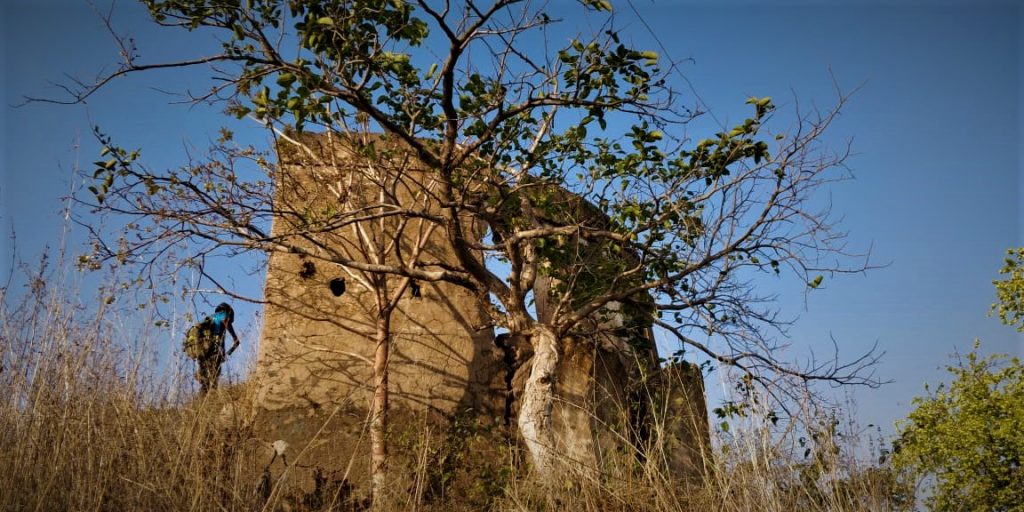 We soon reached near the banks of the Betwa river far away from the town of Orchha. Parking our cycles we continued on foot along the rocky banks of the river, crossing small rivulets till we reached, what looked like the remains of a fort wall high up a small hill. We followed our guide up the hill to reach the top. 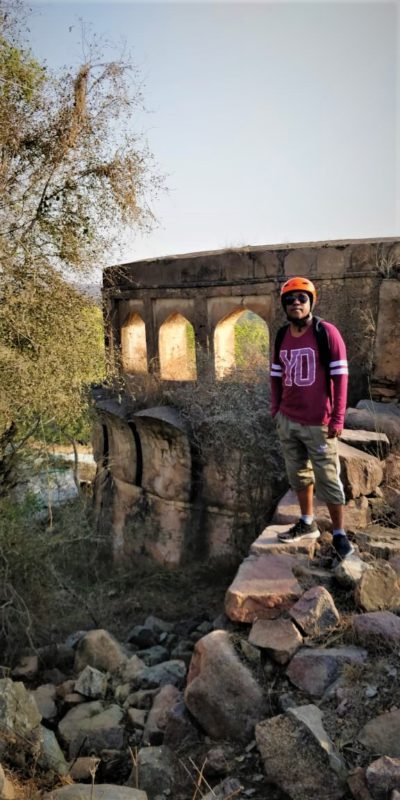 The view of the Betwa river from here was spectacular. Though we had missed seeing the sunrise from here, it was still quite an experience. Reaching the hillock itself was a thrilling adventure and the dilapidated remains of what must have once been a watch-tower added to the magic of the moment. Our guide informed us that the point on which we stood was called the Satdhara Sunrise point, as it offered a splendid view of the rising sun over the Betwa river which split into seven currents at a point that was visible from the hill. 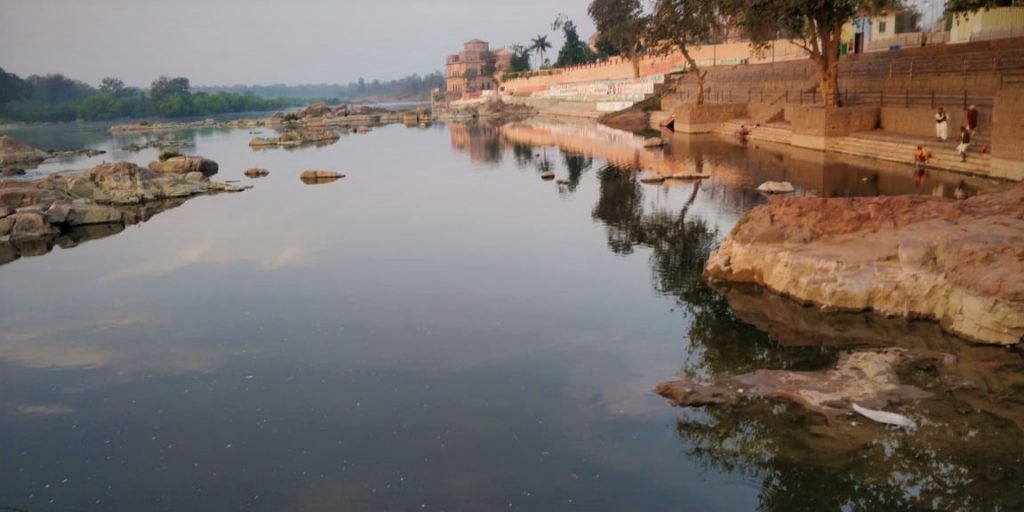 Wherever you go in Orchha, you are sure to feel the presence of its mysterious-looking Chhatris. These Chhatris are memorials cenotaphs of its Bundela Kings and stand besides the flowing waters of the river Betwa as an eternal ode to the departed. 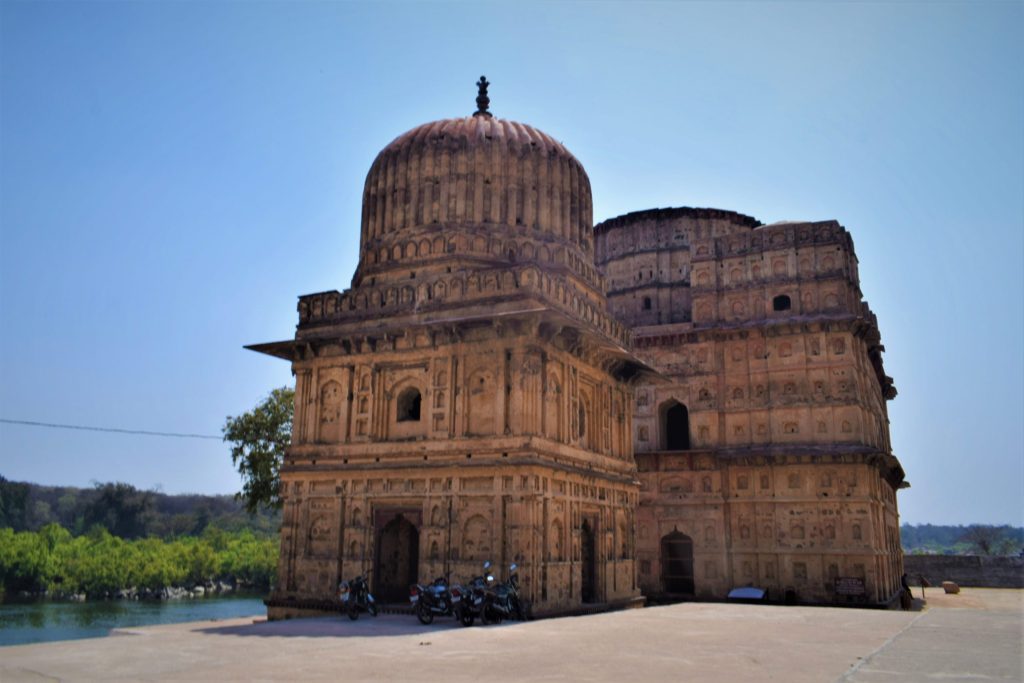 The Chhatris are in many ways the identity of Orchha. They add to the enigmatic aura of place, standing as they do besides the Betwa river. 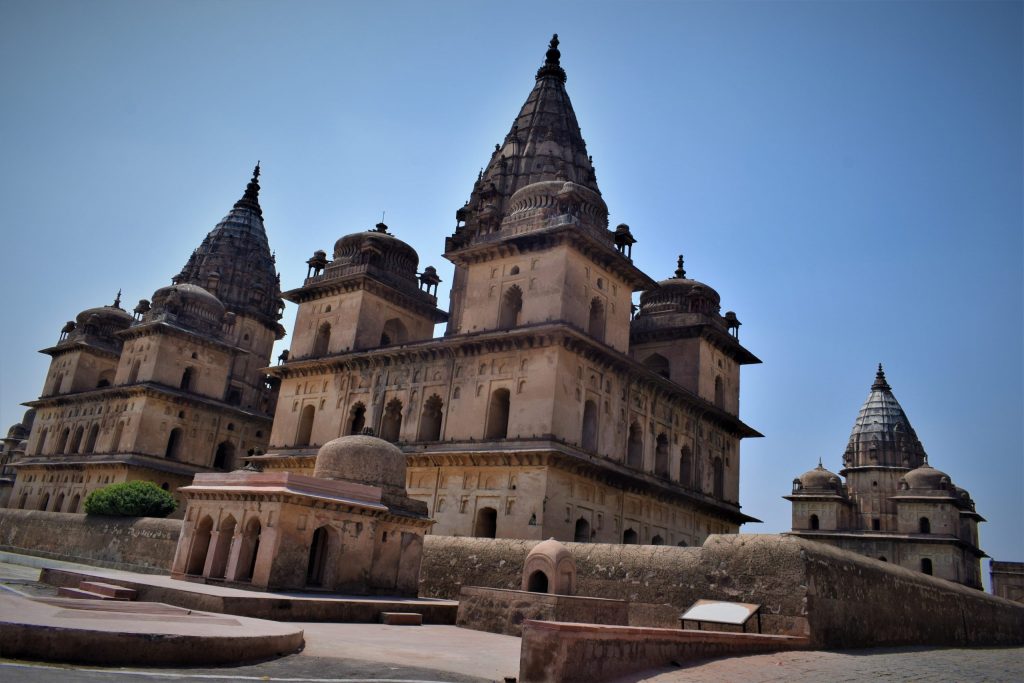 Visiting the cenotaphs of Orchha in the early morning has a magic of its own. The early morning sun and the stirring of life from the night’s slumber strike a sharp contrast to the somnolence of the stone structures and give a message of the transient nature of life. 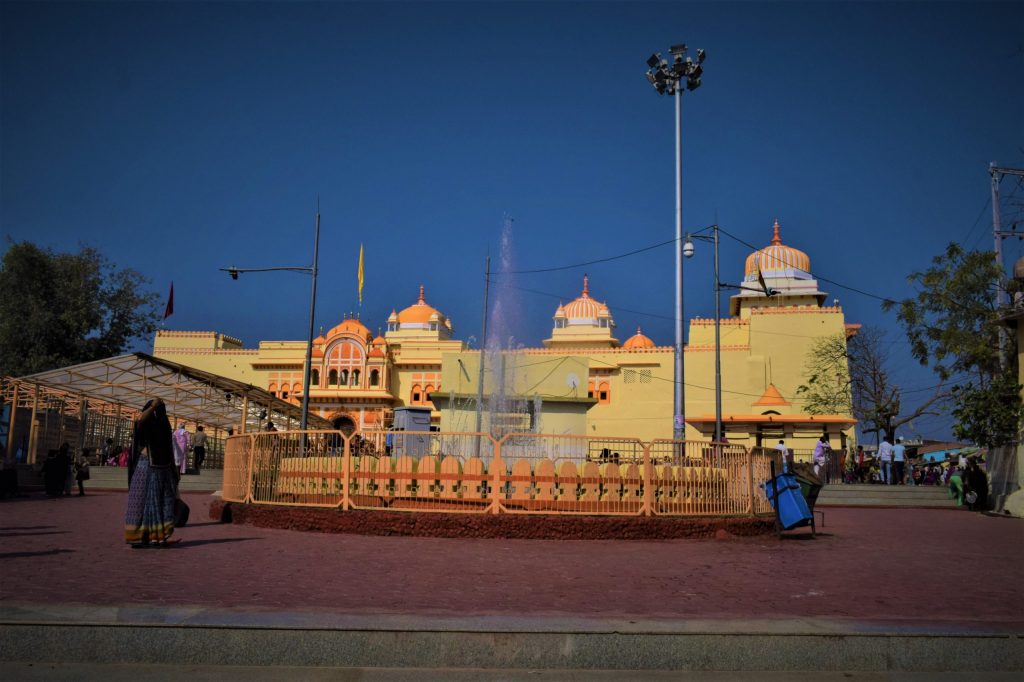 If you are in Orchha, you cannot think of leaving the town without paying you respects to Raja Ram at the famous Shri Ram Raja temple. This famous temple is unique in that here the deity Ram is worshipped as a King. 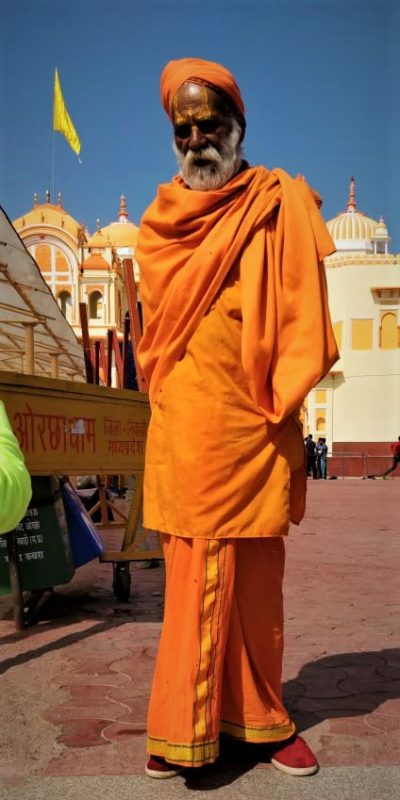 The temple has a vibrant spiritual atmosphere and one can feel the positive vibrations as you make your way towards the temple, walking past shops selling sweets and flowers. 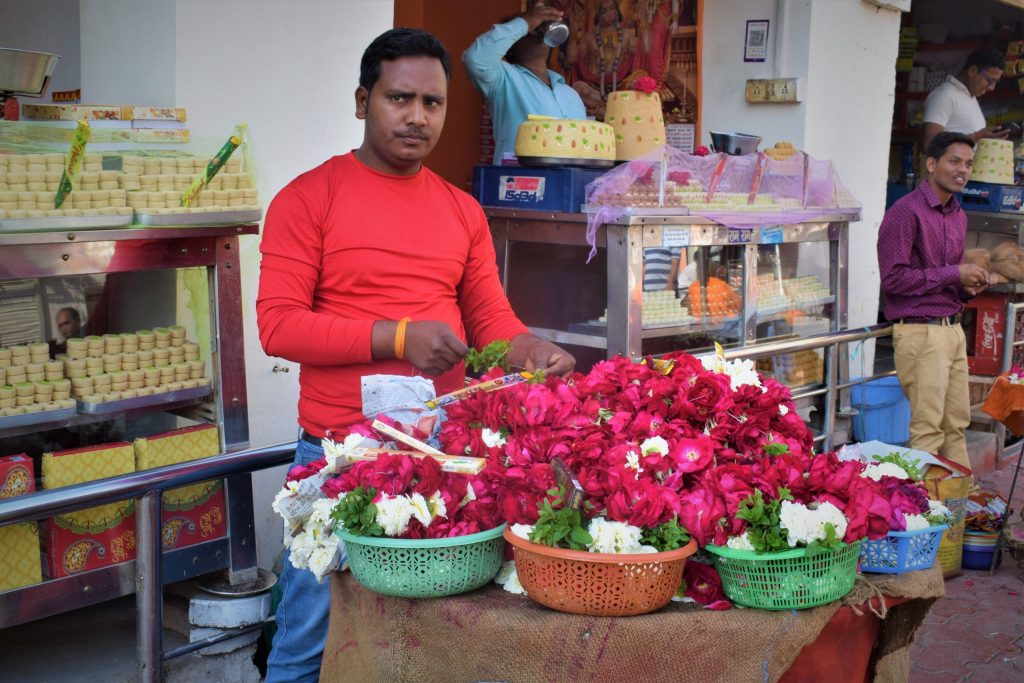 The walk towards the sanctum sanctorum makes for a deep and personal spiritual experience that stays etched in the psyche for long.

We hope you liked reading about our Orchha experience. Have you been to Orchha? Do share your thoughts with us. 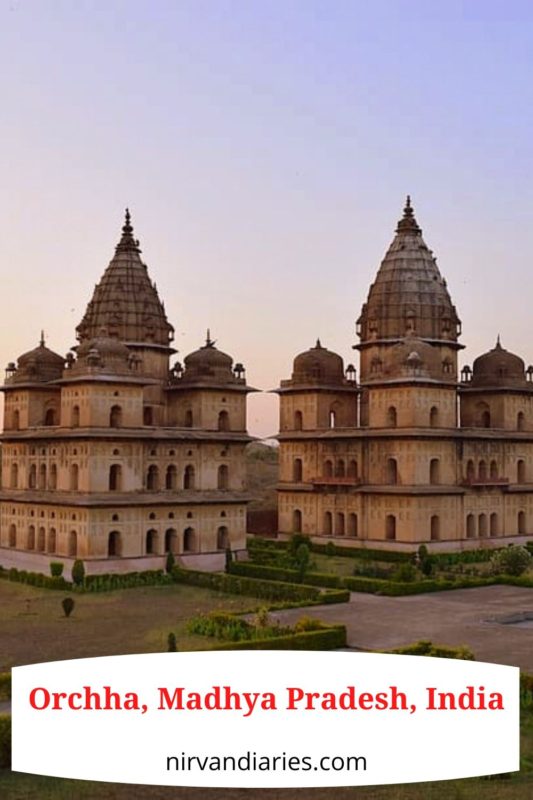 8 thoughts on “Cycling Through Orchha In Madhya Pradesh”