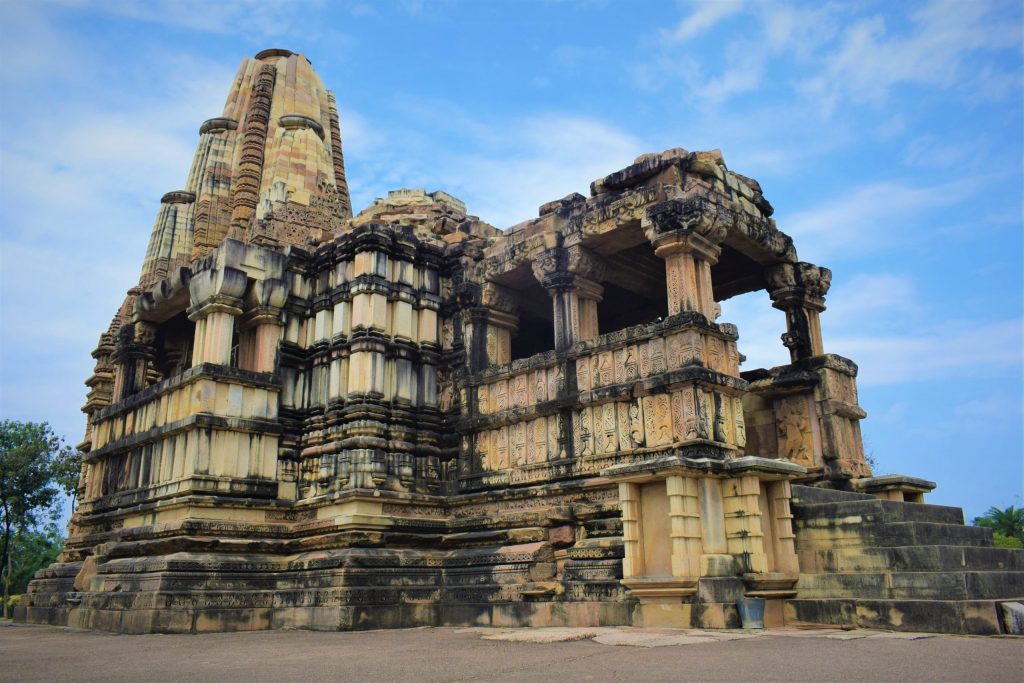 The temples of Khajuraho are renowned for their artistic and architectural splendour, the world over. The Khajuraho Group of Monuments is a designated UNESCO World Heritage Site and draws tourists from across the globe who are wonderstruck by what they behold. Though there were as many as 85 grand temples built by the rulers of the  Chandela dynasty between the 10th and 11th centuries, only around 25 of these exist today to give the world a glimpse of the magical craftsmanship of the architects and sculptors of those times. The temples were built primarily for Shiva, Vishnu, and other Gods and Goddesses of the Hindu pantheon, but many Jain temples too formed part of the temple blitzkrieg that the Chandelas seem to have unleashed in the region, more than a thousand years ago. It is believed that at least 22 of these temples were dedicated to Shiva, a handful of them survive today. The most famous of them is the iconic temple of Kandariya Mahadev, while a lesser-known but equally beautiful and enigmatic is the Duladeo temple. The Duladeo temple Khajuraho dates back to the late 11th century or early 12th century and is believed to be one of the last temples that were built by the Chandelas. It was also the last embodiment of the cultural heritage of Madhya Pradesh that we were visiting on our cultural odyssey into the heart of India with Times Passion Trails and Madhya Pradesh Tourism. 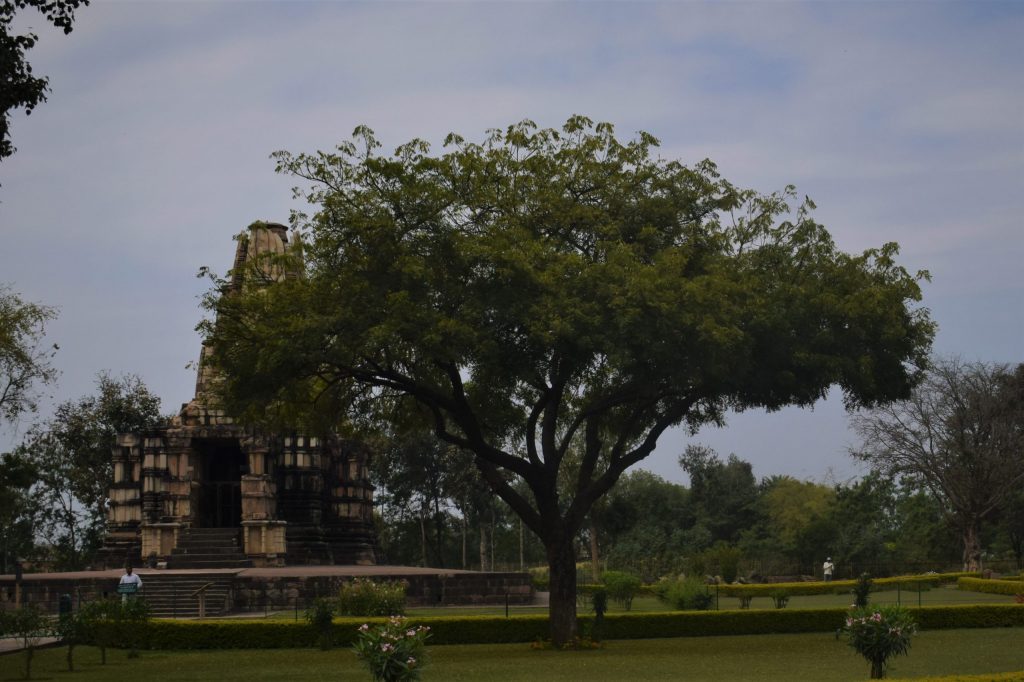 A long path leads to the Duladeo temple that is dated to the early 12th century. The dull facade of the temple is in sharp contrast to the greenery with which it is surrounded. We followed our guide up the steps that lead to the massive platform on which the temple stands, facing towards the east.

Sometime during the 19th century, the Duladeo temple which stood on the banks of the river Khodar was a sanctuary for groups and a resting place used by marriage parties headed for a wedding. One such marriage party had halted at Duladeo temple when tragedy struck. The bridegroom suddenly fell unconscious before the horrified eyes of the bride and others in the group. Heeding to local advice the group prayed and worshipped the Shiva Linga inside the temple and the bridegroom regained consciousness, to the joy.of everyone. Since that day the temple came to be known as Duladeo, which means, “Bridegroom’s God” Another name of the temple is, “Kunwar Math”.

Another local legend associated with the temples is the story of a holy man who lived near the temple and devoted his life to worshipping the Linga form of Shiva in the temple. He himself acquired a halo of piety in the process. Locals venerated him and one day requested him to use his powers and show him the original form of Shiva. He replied saying that this was beyond his powers. But at that moment lightning struck and the skies momentarily revealed a human form. It is believed that lightning strikes the temple regularly, and there is no explanation for that. The holy man died near the temple itself, and a platform is built near the temple in his memory. 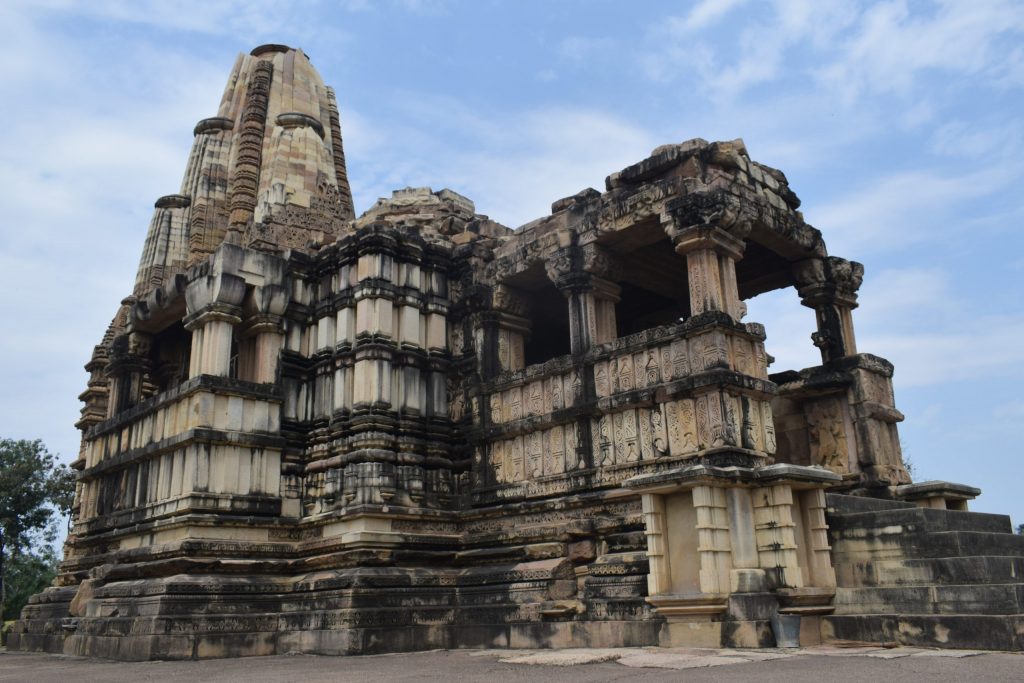 The Duladeo temple too adheres to the Nagara style of architecture. Facing the east is the main entrance of the temple.

One can distinctly see the Ardha Mandapa, Mandapa, and the Maha Mandapa.

After this is the Antarala followed by the Garba Griha.

The Shikhara of the Dulhadeo temple is bedecked with multiple smaller Shikharas termed as Urushringas. However, the Duladeo temple Khajuraho is a Nirandhara temple as it does not have an ambulatory path for Pradakshina within the interior of the temple. 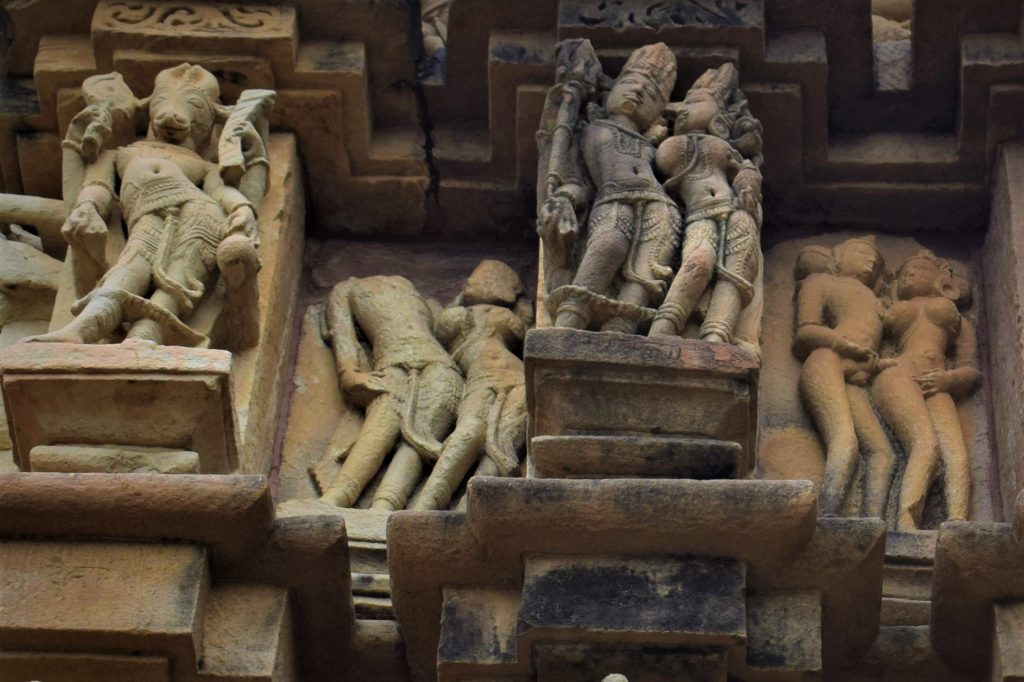 The outer walls of the Duladeo Temple are decorated with beautiful sculptures that depict various Gods and Goddesses of the Hindu pantheon, Apsaras and other celestial beings, apart from erotic couples. The images of Shiva in a meditation posture can be seen in the niches while images of a standing Nandi are also observed on the outer walls. The Apsaras seen on the outer walls of the Duladeo temple are distinct from others as they sport a headgear that is similar to those of the Balinese dancers. They also wear elaborate ornamentation that is a reflection of the evolved fashion of the 12th century. 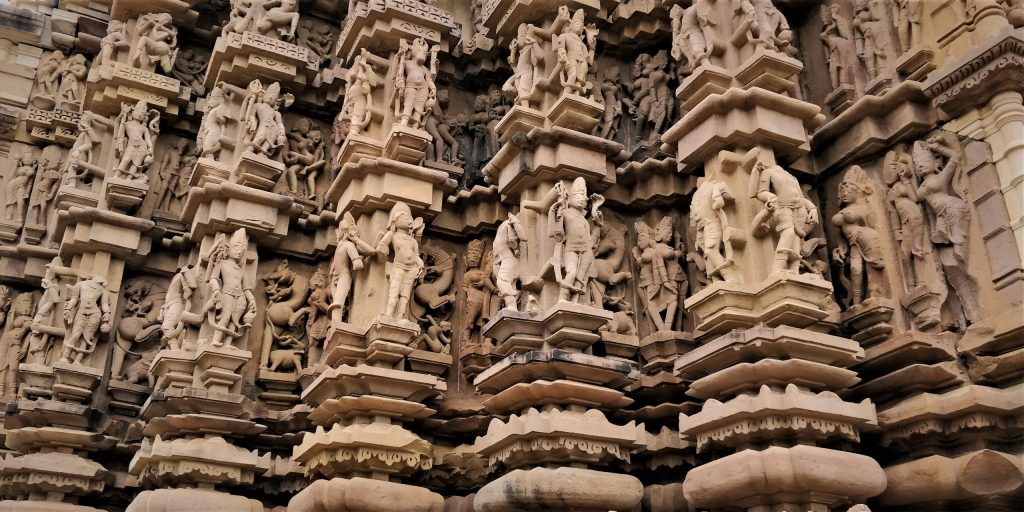 Many sculptures of Shiva and Nandi are clustered on the outer walls, along with other celestial beings. 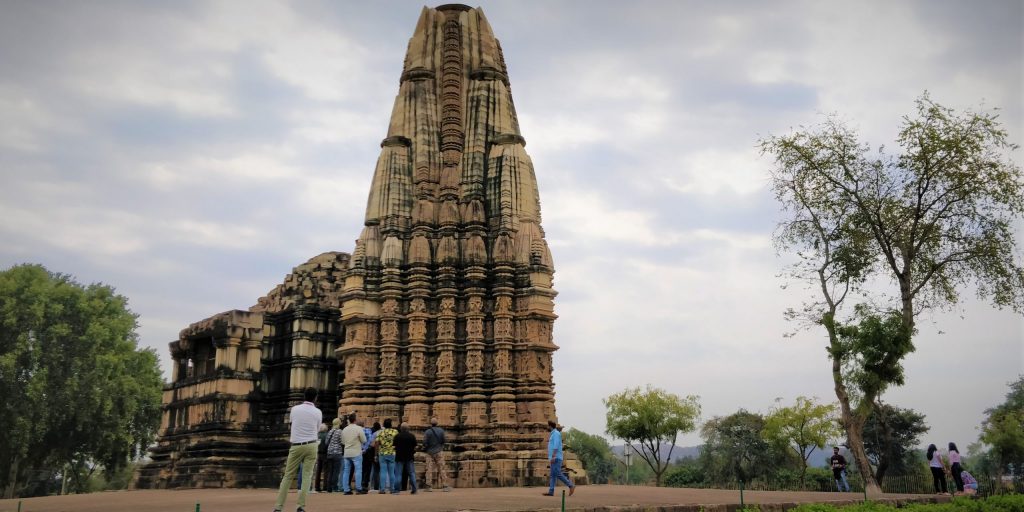 The Garba Griha has an ancient Shiva Linga which is unique. The Shiva Linga is in the form of Rekhal Shiva Ling. What that means is the Linga has numerous lines carved on it, usually, this would be 1008, which is an auspicious number and corresponds to the chanting of Maha Mrityunjay Mantra, 1008 times. The Shiv Ling at the Duladeo Temple is a Rekhal Ling that was probably installed and worshipped to alleviate the sufferings of the people.

The other important Shiva temples of Khajuraho are the Kandariya Mahadeva Temple and the Matangeshwara Temple.

The Duladeo temple stands as a silent symbol of the faith and devotion of Man in the cosmic power of Shiva. It is also a simple statement of the grandeur of the Khajuraho Group of Monuments whose architectural and sculpted wonders continue to amaze visitors from all over the world. Sculptures that depict the ordinary lives of humans in an extraordinary manner and provide the means of transcending from the mundane to the magical. The Duladeo temple along with the other temples with their sculpted enigmas encode within themselves the secrets of life itself for mankind to decode. 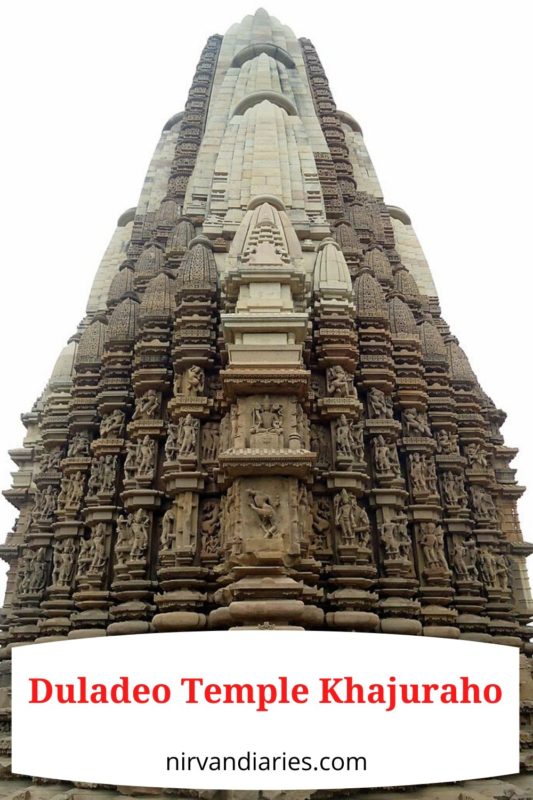