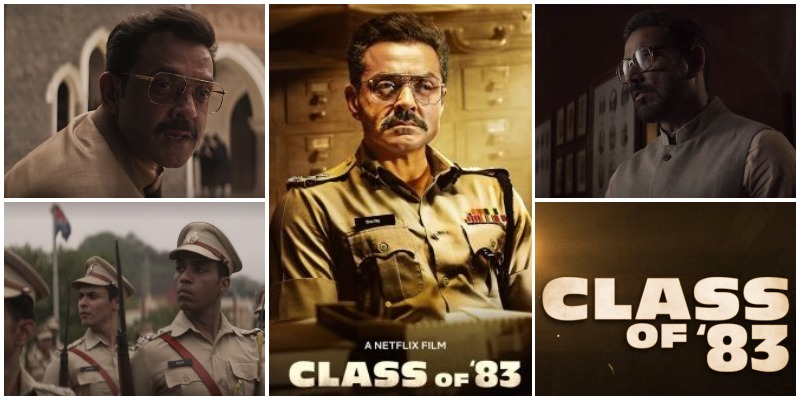 Class of ’83 is a crime thriller on Netflix based on a book by the same name by Hussain Zaidi, check out the plot, cast, and review here.

The OTT platform has swung into prominence this year owing to its audience reach in the current times. Class of ’83  Netflix is the latest entertainment offering to hit the digital screens in India. It is a movie starring another Bollywood second-generation actor, Bobby Deol, which comes close on the heels of Gunjan Saxena – The Kargil Girl. Read on to know more about the Class of ’83 plot, Class of ’83 cast, and Class of ’83 review.

The movie Class of ’83 which is streaming on Netflix is a crime thriller set in Mumbai of the ’80s (No prizes for guessing that). The movie is based on a book by the same name written by S.Hussain Zaidi, a former investigative journalist. The movie is a collaboration of Netflix with Shah Rukh Khan’s Red Chillies Entertainment. Prior to the Class of ’83, the two had come together for, Bard of Blood, and Betaal.

The film is set in Mumbai of the eighties, a Mumbai infected by gangsters of different gangs and plagued by constant gang wars. But before the action shifts to Mumbai, the story takes off at the Nashik Police Academy where another batch of cadets is being trained to join the police force.

The Dean of the academy who is mysteriously conspicuous by his absence is a legendary police officer, Vijay Singh, played by Bobby Deol. Many of the cadets are looking forward to learning and being inspired by the Dean, who makes his presence felt in the dead of night to a group of aspiring Police officers.

The Dean, as it turns out, was a hotshot police officer who gets on the wrong side of his political masters and is serving a punishment posting at the Police Academy, away from the ‘action’ in Mumbai.

Of course, the Dean has scores to settle back in Mumbai, but he knows that it is impossible with a system that is rotting, where there is a nexus between the underworld, the police, and the Government. He takes a leaf from the underworld gangs and starts mentoring a ‘select’ group of 5 from the academy to form a crack squad.

After the cadets pass out and are posted in Mumbai, it is time to launch his plan. The select crack team gets working and starts exterminating members of the underworld.

What happens in the end? Does Dean Vijay Singh realize his goal? You would need to watch Class of ’83 for that.

Our Thoughts About Class of ’83

The movie starts off with a promise, but by the time it ends, you feel really let down. The plot could have been woven into a taut thriller, but it falls by the wayside, somewhere along the way. Mumbai of the ’80s evokes moments of interest, but the story does not grip the viewer.

If the story lets you down, the acting does no better. Bobby Deol achieves the feat of keeping the same inscrutable expression, whatever the situation and whatever the scene. Though it is understandable that he is sulking the fact that he is on a punishment posting, still, it is a commendable achievement to walk through the entire film with a poker face. The finesse and polish that one would have expected from a Red Chillies presentation is woefully lacking and the other actors who play the characters that are part of the Dean’s league of extraordinary policemen, come across as raw and amateurish. In a nutshell watch Class of ’83, if you have no other better work.

The Trailer of Class of ’83

We hope you liked our honest review of the Class of ’83. Please do subscribe to our blog for more interesting articles on entertainment, culture, travel, education, and much more. 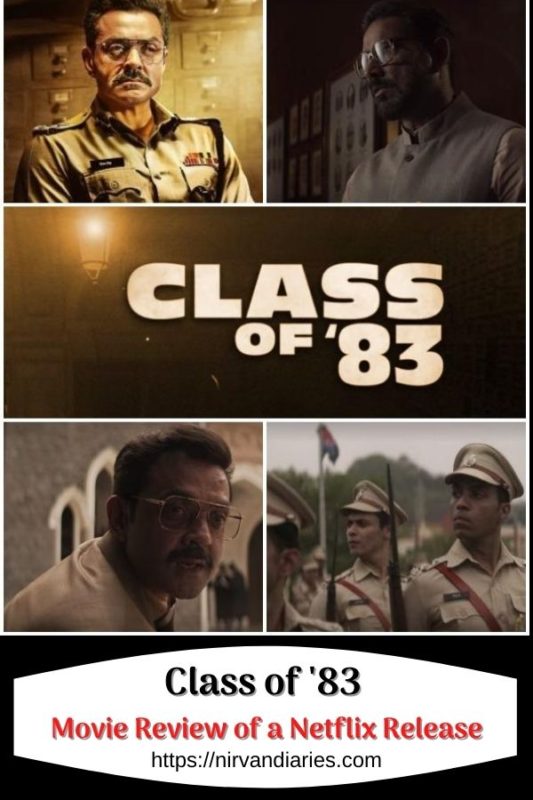