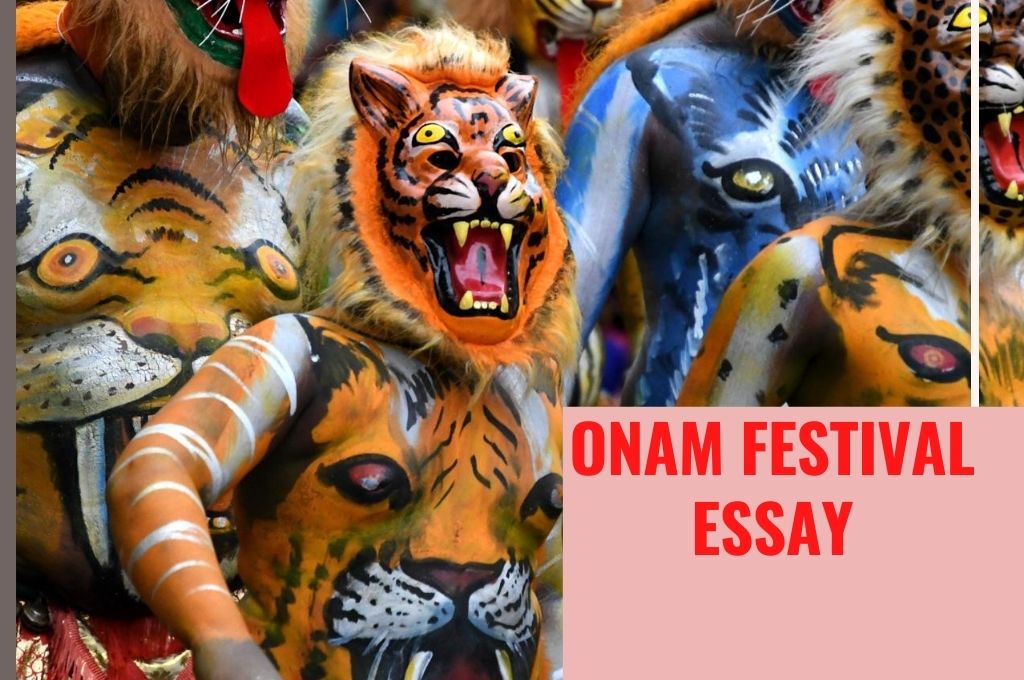 Are you looking for an Onam festival essay in English, few lines on Onam, or want to write a letter to a friend about Onam, you are in the right place.

India is a country with many colourful festivals that occur throughout the year. Festivals are always a great subject for essays at school. Be it Ganesh Chaturthi Essay or Janamashtami Essay, Independence Day Essay or an Onam festival essay. Are you looking for information to write your Onam essay in English? Then you are in the right place, read on to know all about Onam and how it is celebrated.

Onam is a grand festival celebrated in the state of Kerala in India. It is a festival that is spread over 10 days. The festival is celebrated in honour of the King Mahabali, also known as Bali. Bali was given a boon by the God Vishnu according to which his spirit could visit his kingdom once in a year. Hence it is believed that the king visits his kingdom which is the region of Kerala every year during Onam.

Onam is celebrated with great joy and enthusiasm by Malayalees not only in Kerala but across the world. Some of the highlights of Onam are boat races called Vallam Kali, dances by people dressed as tigers known as Pulikali, beautiful decorations with flowers which is called Pookkalam. One of the important aspects of Onam is the Onam Sadya. This is a feast of many vegetarian dishes served on a banana leaf.

Onam is one of the many important festivals that are celebrated in India. It is a harvest festival that is celebrated in the southern state of India, Kerala. Onam falls in the Chingam month of the Malayalam calendar which is usually in the month of August-September.

Onam is a festival that is associated with God Vishnu as well as King Mahabali. The origin of Onam is related to Hindu mythology. King Mahabali or Bali was the grandson of Prahalad and was a powerful King who even defeated the Devas or Gods, and ruled over the three worlds. The defeated Devas approached Lord Vishnu for his help.

Vishnu assumed the form of a dwarf brahmin, Vamana, and went to King Mahabali. At that time King Mahabali was performing a Yajna to celebrated his victory. He had declared that he would donate anything to Brahmins on that day. Vamana asked him for just the land that he could cover with three paces. King Mahabali agreed to this strange request.

Vamana immediately assumed a huge form and with only two paces covered all of the lands that King Mahabali ruled over. There was no place for the third pace. King Mahabali by then had realized that Vamana was none other than Vishnu, and asked him to take the last pace and keep his foot on his head. Vishnu did so, and also gave him a boon that his spirit would visit his kingdom once a year. Onam is the celebration of the annual visit of King Mahabali. Lord Vishnu is also worshipped during Onam.

Onam celebrations stretch over 10 days. On the last day, a feast is prepared with many items served on a banana leaf. this feast is famous as Onasadya or Onam Sadya. The feast consists of rice and different varieties of curries, Payasam, and sweet dishes like Appam and others.

The celebrations of Onam involve many rituals and events. Some of the important events are Vallam Kali which is a boat racing competition, Pulikali which are dances by men dressed as tigers. Another important feature of Onam is Pookkalam in which houses and temples are decorated with beautiful decorations with flowers. Other celebrations include dances by women, events like Tug of War, mask dance, and musical performances.

The Onam festival is an important religious and cultural event of Kerala. It is not only celebrated by Hindus in Kerala, but by people of other religions also.

10 Lines on Onam in English

Do let us know how you find our series of essays on different topics and what more topics you would like us to cover.

Happy Onam and have a great time.